Chumash Indians were the early inhabitants of the valley. They called it Ojai, which derives from the Ventureño Chumash word ʼawhaý meaning “moon”. The area became part of the Rancho Ojai Mexican land grant made to Fernando Tico in 1837, and he established a cattle ranch. Tico sold it in 1853 without much success to prospectors searching for oil. By 1864, the area was settled.

The town was laid out in 1874 by real estate developer R.G. Surdam and named Nordhoff, California, in honour of the writer Charles Nordhoff. Leading up to and during World War I, American sentiment became increasingly anti-German. Across the United States, German and German-sounding place names were changed. As part of this trend, Nordhoff was renamed Ojai in 1917.

The main turning point in the development of the city was the coming of Edward Libbey, early owner of the Libbey Glass Company. He saw the valley and fell in love, thinking up many plans for expansion and beautification of the existing rustic town. A fire destroyed much of the original western-style downtown Nordhoff/Ojai in 1917. Afterwards, Libbey helped design, finance, and build a new downtown more in line with the then contemporary taste for Spanish Colonial Revival style architecture. The projects included a Spanish-style arcade along the main street, a bell-tower reminiscent of the famous campanile of the Basilica Menor de San Francisco de Asis in Havana, and a pergola opposite the arcade.

To thank Libbey for his gifts to the town, the citizens proposed a celebration to take place on March 2 of each year. Libbey declined their offer to call it “Libbey Day”, and instead suggested “Ojai Day”. The celebration still takes place each year in October. The arcade and bell tower still stand and have come to serve as symbols of the city and the surrounding valley. Libbey’s pergola was destroyed in 1971, after being damaged in an explosion. It was rebuilt in the early 2000s to complete the architectural continuity of the downtown area.

The Taormina neighbourhood was established as the first historic district in the city in 2016. The housing development was built in the style of French architecture of Normandy in the 1960s and 1970s by members of the Theosophy movement adjacent to the Krotona Institute of Theosophy. Taormina’s founder, theosophist Ruth Wilson, envisioned the development as a retirement community for fellow theosophists but in the early 1980s, a court ruling required the community to be open to residents of all faiths and backgrounds. 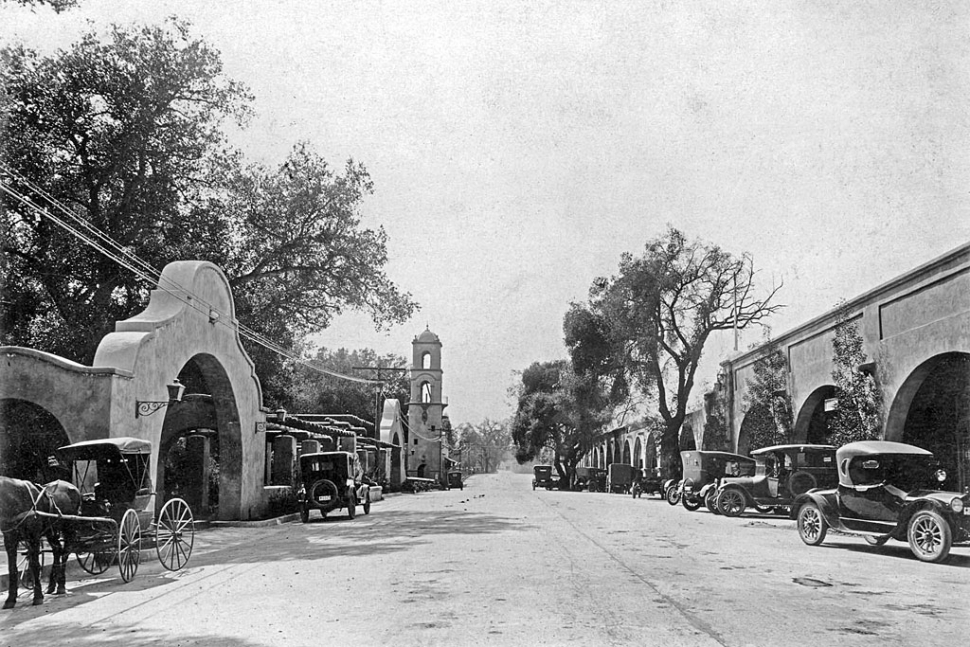