About The Pepper Tree Retreat

History of the Pepper Tree Retreat & the Krishnamurti Educational Center 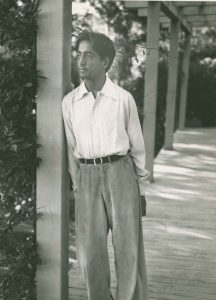 The property at the East End of the Ojai Valley, at 1098 &1130 McAndrew Road, has long been associated with the person of J. Krishnamurti and his activity as an educator and public speaker. The original structures, now known as the Pepper Tree Retreat, and the so-called Pine Cottage, were built in the late 1890s. At one point, in the mid-1920s, they were acquired by Krishnamurti and his brother Nityananda, and held by the Brothers Association Trust. After Nityananda died at Arya Vihara (Noble Home) from tuberculosis in 1925, Krishnamurti continued to reside here whenever he came to stay in California during his world-wide travels. In fact, he spent six entire years here during the time of World War II, since he couldn’t travel and give talks during that period.

But in the 1960s he spent only little time in Ojai, since difficulties had arisen about the ownership rights of the property, and it wasn’t until 1975 that a settlement was reached, and he returned to Ojai on a regular basis – February through May each subsequent year. In 1975 he founded the Oak Grove School, which for its initial year operated on the east end property before moving to the new campus and class room buildings in Meiners Oaks, eight miles toward the west of the valley. For the initial six to seven years of the school, some of the teachers and staff resided at Arya Vihara (AV), until in the early 80s the main house was turned into the Krishnamurti Library.

In 1977 Mrs. Mary Zimbalist commissioned a large extension of Pine Cottage, designed by the L.A. architect Charles Moore. She also had the so-called Annex, built in the late 1940s by J. R. Davidson, renovated and expanded. Being right across from Pine Cottage, it functioned as guest quarters, office and archive vault until the construction of the new Archive Building, completed in 2000. Currently, the Annex is part of the Pepper Tree Retreat and consists of four guest apartments, while the Archive Building served as the Library for about nine years, while AV began to be used as a guesthouse, named The Krishnamurti Retreat, a simpler version of the current PTR.

Over the years, many changes occurred. Most significant were the passing of J. Krishnamurti in 1986 and that of Mrs. Zimbalist in 2008. Both of them had determined that after their deaths, Pine Cottage (as it was still called, although the pine trees were long gone) was to be used as the Krishnamurti Library and Study Center, and nobody was to reside there. Less than a year after her passing, AV was radically renovated and spruced up, and designated ‘The Pepper Tree Retreat’ and offered to the public at large as a guesthouse with ten units.

In 2014 another structure was constructed to allow certain events, like yoga workshops, to occur on the property. It is a one-room circular structure called the Event Pavilion, right next to the new medicinal herb garden.